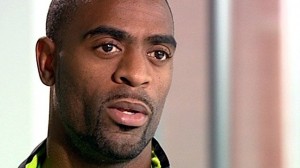 Statement from Tyson Gay: After positive test for a banned substance.

“I don’t have a sabotage story. I put my trust in someone and was let down. I don’t have anything to say to make this seem like it was a mistake or it was on USADA’s (United States Anti-Doping Agency) hands, someone playing games. I don’t have any of those stories. I made a mistake. I know exactly what went on, but I can’t discuss it right now. I hope I am able to run again, but I will take whatever punishment I get like a man”

a revelation really, an honest and selfless acceptance for testing positive.

Tyson Gay is an American track and field sprint athlete who competes in the 100-meter and 200-meter dash. His 100 m personal best of 9.69 seconds is the American record and makes him the second fastest athlete ever.

Is it just me? How is Richie Port able to ride the best climbers in the game off his wheel after being a domestique for two weeks…*sigh*

Watching the live feed of Chris Froome cross the finish line first on Mont Ventoux felt hollow. The legacy of past doping athletes is formative, creating a cynical lens.

The post race interview with Chris Froome gives away the false modesty of an athlete that is wrestling with guilt for cheating. When Froome was asked about beating the young Columbian climber to the finish line today, his responses were searching and contradictory.
In the span of three sentences Chris Froome describes how he never thought he would win the stage and only wanted to increase the margins on the GC riders…then in a confusing turn of logic he mentions in a matter of fact way that he was surprised how hard it was to catch Quintana and put a minute and half on him in the last kilometer.  Patronizing, hollow.

Chris Froome wrote his name in the Tour de France history books on Sunday with victory on the famed Mont Ventoux.

After repeatedly attacking Quintana in the final two kilometers, Froome describes his win as only being possible because Quintana was “fading”. That comment belies an awkward self conscious understanding that he should not have been able to catch and drop Quintana in the fashion he did.

Chris Froome could have done a more convincing job of faking his humility by not attacking Quintana in the final kilo in the same way Richie Port should have kept his ego and his “physical advantage” under wraps on the day he attacked his way into second place over all in the Tour after towing Froome up the hill. “Not Normal”

The arrogance and greed of the Sky team is disappointing and diminishes the experience of the Tour de France,